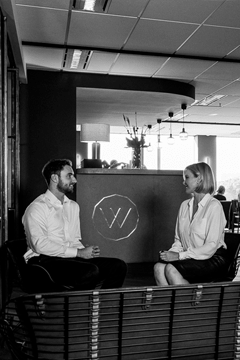 But, along with thinking differently in order to come up with revolutionary new ideas or products, there is also seeing differently. Great creators, innovators, and entrepreneurs look at the world in ways that are different from how many of us look at things. This is why they see opportunities that other people miss.

The story of Velcro is well known. A Swiss engineer, George de Mestral, decided to look more closely at the burrs (seeds from plants) he found clinging to his clothing after a walk in the woods. He took out his microscope and saw that nature had designed hooks on the burrs, which had then attached themselves to looped fibers in his clothing. The famous hook-and-loop alternative to the zipper, under the name Velcro, was born. (Today, there is a whole field, called biomimetics, devoted to imitating nature in order to solve human problems.)

.Less well known, but equally deserving of fame, is the story of Softsoap. An American entrepreneur, Robert Taylor, decided to look more closely at how bars of soap actually appeared once unwrapped and used in bathrooms. Zooming in on the soap dish in an otherwise spotless setting, he saw an unpleasant puddle of ooze. He decided that the answer was liquid soap dispensed in a beautiful pump dispenser, and this is how Softsoap, which changed the entire soap industry, was born.

Two brilliant entrepreneurs who looked at things differently. Whether through a microscope or a zoom lens, and whether literally or metaphorically, they took the key step of looking at the familiar in an unfamiliar way. The great French mathematician Blaise Pascal said: “Small minds are concerned with the extraordinary, great minds with the ordinary.” It seems he had in mind something similar: Look at what is right in front of us, but look in a way that escapes most people.

There is a word for this activity: de-familiarization. Working in the early twentieth century, a Russian literary theorist called Viktor Shklovsky pointed out how Tolstoy achieved heightened effect in his writing via techniques such as describing objects from a distorted perspective and refusing to use the customary names for objects, and by generally “making strange’” (de-familiarizing) the otherwise familiar. Later, the great French director Jean-Luc Godard revolutionized cinema with his use of jump cuts in Breathless. Taken for granted today, this innovation must have seemed baffling to many people at the time. Up until then, great efforts had gone into creating a smooth continuous flow (“continuity”) on the screen. After all, a continuous flow is how we experience vision, thanks to the workings of our brains. This is the familiar. But Godard decided to break up this flow to force us to step away from our usual assumptions and see his characters as, literally, jumpy and disconnected. Now, we sense the feelings of isolation experienced by his characters and also their efforts — unsuccessful and tragic, in the end — to connect with each other. Godard lifted the technique of de-familiarization from the page to the screen.

The examples of these great artists give everyone — entrepreneurs included — some tips on how to stop seeing the world in the familiar way and start seeing it in unfamiliar and generative ways. When we look at the world, we should not just examine, but examine with a deliberately different perspective. Not just name what is around us, but come up with new names. Not just consider the whole, but break things up (or down) into pieces. These techniques can help us see our way to the new and the revolutionary, whether in the arts or in business.

Sherlock Holmes famously said once to Watson: “You see, but you do not observe. The distinction is clear.” More advice on how to break through the familiar and instead observe, truly observe, comes from psychologist and writer Maria Konnikova, in her book Mastermind: How to Think Like Sherlock Holmes. She writes: “To observe, you must learn to separate situation from interpretation, yourself from what you are seeing.” As a technique to improve our ability to operate this way, Konnikova suggests describing a situation of interest out loud or in writing to a companion. As she notes, Holmes used Watson in this way to talk through his observations when investigating a case, and, often, it was through this exercise that key points in the case would become evident. This is another technique for aspiring artists and entrepreneurs — and consulting detectives — to try.

Our brains are designed to stop us paying too much attention. This is well demonstrated by the optical illusion called Troxler fading (named after the nineteenth-century Swiss physician who discovered the effect). If presented with a steady image in the area of our peripheral vision, we actually stop seeing it after a while. This phenomenon — the general neuroscientific term is habituation — probably points to an efficient way in which the brain operates. Neurons stop firing once they have sufficient information about an unchanging stimulus. But this does not mean that habituating is always our friend.

We can think of the effort not just to think differently, but also to see differently, as a way of countering our built-in tendency to habituate, to sink in to the familiar way of seeing and experiencing. One way in which great artists, entrepreneurs, and creators of all kinds come up with the insights that enable them to change the world is that, very literally, they do not see the way most of us do. Their methods teach us that by seeing differently, we can end up seeing what no one else has yet seen. This is how the future is built.