When A Top Performer Wants to Leave, Should You Try To Stop Them? 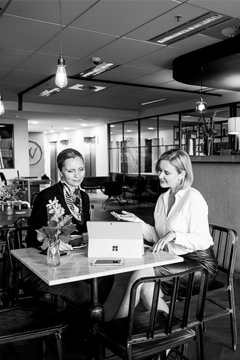 You’re the manager of a high-performing team of great people. The team has hit its stride; members have even developed a bit of a shorthand with each other that helps them weather challenges and nail deadlines.

Then a core member of the group gives notice that they’re leaving.

It’s easy to assume retaining them is the best outcome for the company, the team, the work — and for you. So, naturally, you immediately try to figure out how to keep your prized team member. Could you get them promoted? Or at least get them a raise? Would just giving them more responsibility convince them to stay?

I’ve worked as a leadership coach for over 10 years, and I’ve found that when managers face this situation with humanity and empathy for the individual team member — prioritizing their needs and letting them go if that’s what’s best for them — the result can often be a more positive outcome for both the individual and the company.

First, when managers have honest discussions with their employee about what chose them to seek a new opportunity, it focuses the conversation on what the employee wants, and what the manager can actually control. Sometimes it’s a matter of a raise or title change, which may offer a chance for resolution with minimal impact to a team.

But when an individual’s motivations for leaving are outside their manager’s control, using money or a promotion as incentive to stay becomes a short-term solution to a larger issue and just postpones the eventual financial costs associated with hiring and training their replacement. If your employee’s concerns remain unaddressed, they’ll likely suffer from low morale and be less productive, which in turn has negative effects on those around them. In these cases, it’s best for all parties to let that person go.

Second, there is opportunity in the unknown. Though it may not be your first inclination to consider a big change to your team as a positive thing, a departure creates space for team members to stretch and contribute in new ways, reimagining the role they want to play. It is also a natural moment to bring in additional contributors with fresh perspectives, and explore different directions and possibilities for the work.

Finally, treating employees empathetically and showing them they’re valued as people, not just workers, has positive effects that ripple through the rest of the team and beyond. According to a 2015 Gallup study, “employees who feel as though their manager is invested in them as people are more likely to be engaged” in their work, behavior that’s strongly connected to business outcomes like productivity, innovation, and profitability.

Whether these benefits materialize if the employee does choose to leave hinges on the tone you set for the team. Frame the situation optimistically instead of treating it like impending doom. Share your excitement for your departing team member’s growth. Explain the opportunities for the team. Acknowledge the emotional and practical impact on the team. Answer questions — about the reasons for the departure, why the individual wasn’t able to be convinced to stay, and about how the team will be affected — with a balance of transparency, compassion, and respect.

Take my experience with Chad, whom I had mentored when we worked together at a previous company. When I took on a new position leading a team that needed to spark and implement creative ideas, I knew Chad would be an ideal partner to bring on. He was a unicorn: the perfect blend of visual designer, software developer, and innovative problem-solver — with a sense of humor — and someone I could rely on to be my personal voice of reason. For the next 18 months, our team did amazing work together. But then, Chad came to me with news that threatened to turn everything we’d achieved upside down: he had an offer from another company.

It felt like his timing could not have been worse. He was my only software developer, and we were deep in the middle of building a learning product with a hard deadline, something unique that wouldn’t be easy for someone to jump in and finish. I was certain the project would unravel without him.

But Chad had trusted me enough to tell me about the offer before it was final, and I felt like I had to consider his needs, too. When I began to step back and think about it from Chad’s point of view, his move made sense. While we’d done some innovative things together, he needed more complex challenges and the community of having others in his discipline to help him develop. When we talked through his options, including negotiating his title and salary at our firm, it was clear that I couldn’t give him what he needed, and that his best option was to take the offer.

We delivered the tough message to our team together, bringing them through our decision-making process and allowing them to ask questions about how they would be affected. I shared my belief that Chad’s absence would be an opportunity to imagine new directions to take our work, and I showed my commitment to supporting each of them through the change by making time for deeper development conversations and making space for individuals to try new roles and projects.

Envisioning the possibilities and potential for the future galvanized the team. We reorganized and decided to tackle some of the work we’d previously tabled. A few of the team members took on new responsibilities. And when we hired new members, they were strategic for the team we were becoming, instead of just replacing Chad to remain the team we were.

I’ve long believed that the role of manager is for life. You’re stepping into a role that provides support, development, and caring for individuals as they navigate some of their most impactful decisions — ones about their career.

What happened to the team since Chad left? Some rose into leadership positions. Some gained new skills. Others gleaned insights about themselves that changed the course of their careers. And where is Chad today? He’s imagining a new future for himself, and I’m right there with him, offering him mentoring, coaching, and often just listening.